Since the founding of People’s Republic of China 70 years ago, our country constantly forged ahead and developing from changes and challenges. 2019 is a memorable year. Looking back at history, we are more aware of the hard-won achievements of today and the need for us to work together in the new age. In the past thousands of years, there is a dragon standing in the east of the world. This is we deeply loved motherland - China. 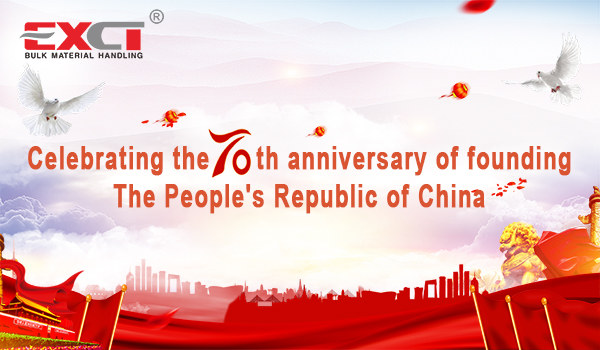 Over the past 70 years, we have completed the socialist revolution, advanced socialist construction and carried out a great new revolution of reform and opening-up, greatly liberating and developing thesocial productivity. From 1952 to 2018, China's GDP jumped from 67.91 billion to 90.03 trillion, which rose by 174 times in real terms. GDP per capita increased from 119 yuan to 64,600 yuan, which rose by 70 times in real terms.
China has become the second strongest economy, the first largest trader of goods, the largest foreign exchange reserves, the second largest trade in services, the second largest use foreign capital and the second largest foreign investment in the world. Major achievements have been made in mobile communication, modern nuclear power, manned spaceflight, quantum science, deep-sea exploration, and supercomputing and other scientific and technogical field. In 2018, the per capita disposable income increased 59.2 times than that in 1949, and the per capita consumption expenditure increased 28.5 times than that in 1956.
Over the past 70 years, The economic construction, social construction and ecologicalcontruction of China has been coordinated growth. For example, in field of infrastructure, by the end of 2018, China has 132,000 km of railway running mileage, among which 30,000 km were high-speed railways, ranking second in the world and first in the world respectively. The total length of road is 4.85 million kilometers, including 143,000 kilometers of highway, ranking first in the world.
Over the past 70 years, education, culture, medical health to sports, social security, pverty reduction, environmental protection of China have full development. Over the past 70 years, average life-span has risen from 35 to 77 years, and forest coverage has increased from 12.7 percent in 1976 to 22.96 percent in 2018.
As a builder of world peace, contributor to global development and defender of the international order, China has made outstanding contrbutions. At present, China is the largest contributor of peacekeeping force among the five permanent members of the UN security council. China's contribution to world economic growth ranks first in the world. China's " Belt And Road" initiative has received positive response from more than 160 countries and international organizations.
All stuff of EXCT celebrates the 70 anniversary of the people's republic of China.
Previous :
Malaysia clients visited EXCT for Palm Fibre treatment system
Next :
Netherlands Vibratory Separator was Sent to Detection Institution for Testing
Inquiry